This year the last round of the 2019 MotorSport News HRCR Road Rally Championship is the Vale of Clwyd and I’m really pleased to have two World Champions in the MSN guest car for the weekend
Phil Mills will be driving; Phil won the World Rally Championship in 2003 with Petter Solberg in a Prodrive Subaru and in Oct he will team up once again with Petter for “a last hurrah” on Rally GB
In the sensible seat welcome David Richards CBE who won the World Rally Championship in 1981 with Ari Vatanen in a Ford Escort. Since then David has founded Prodrive (so has bossed Phil Mills around before!) run two F1 teams Benetton and BAR managed to find time to be Chairman at Aston Martin and now is the Chairman of Motorsport UK our Sport’s governing body ….. and he’s 3 years younger than me …..where did I go wrong!
Please welcome them both to the Championship

So what of the Championship, for drivers it’s between Richard Isherwood and Darell Staniforth with Richard “in the pound seat” but the Navigators Championship is more open with Nicky Staniforth, Roger Bricknell, Matt Vokes and Martin Pitt all still in with a shout, it should be a interesting day
Outright victory on the day will be disputed by the regulars Isherwood/Nick Bloxham (in for Ian Canavan), the Staniforths, the Bricknells, Mellings/Carr and Haygarth/Taylor but they’ll be pushed all the way by Howard Warren/nav still to be confirmed, Dermot Carnegie/Paul Bodset (always quick), current Champions Ian Crammond /Matt Vokes, Paul Wignall/Mark Appleton (these two come out once in a blue moon and usually win!) and new pairing Paul Dyas/Martyn Taylor.

Another in with a shout must be Neil Wilson with Leigh Powley in their Porsche 924 many know local hero Neil from his day’s co driving for Roger Clark, stuffum Buffum, Russell Brookes and Henri Toivonen with whom he won the RAC in 1985 in a Lancia Delta S4. I’m lucky enough to have known Neil for a bit longer, in 1966 on my 3rd event Y Rali Gogledd Cymru Ian Rodgers and Neil Wilson were Semi-Experts and my brother Roger and I were Novices, that’s 53 years ago!
It’s also wonderful to welcome for the first time in regularity rallying John Edwards-Parton who used to entertain on Motoring News events in the early 70’s first in a Ford Anglia then an Escort Mexico now driving an MGC GT with Ian Doble on the maps, more recently I met up with John in the paddock for the Burton Power Blue Oval Saloon series driving a Fiesta. Driver database have his summary down as 14 races, 4 wins, 10 podiums, 1 pole position and 2 fastest laps, that’s some record

Also guaranteed to entertain are the 3 pre-War cars of Stuart Anderson/Sue Shoosmith – Bentley Derby, Bent Jakobsen and Paul Whyte – Alvis Silver Eagle and the always quick (sometimes too quick!) Elliott Dale and Charlotte Ryall in another Bentley Derby hopefully these cars will be seeded close together
In the Expert class the Championship has already gone to Harvey Steele/Martin Pitt Volvo144 but the Championship podium places are still up for grabs with the Martins, Goodwin/Davies and the Wolstenhulmes all fighting for points 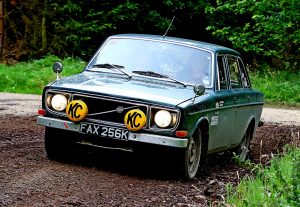 The Novice Champions have also been decided with Ken and Sarah Binstead winning at a canter and Phil Wood looks likely to secure “Vice Champion” (old karting phrases don’t go away) and Phil’s kindly chauffeuring me round on the event. The Novice navigators will be a straight fight between Julie Clifton and John Parker for the runners up spot
Finally, it’s great to see David Smith and Norden Lester back out after their Catterick troubles, now in a VW Golf.